TIME TO REVISIT STAMPS THROUGH A FRESH LENS? 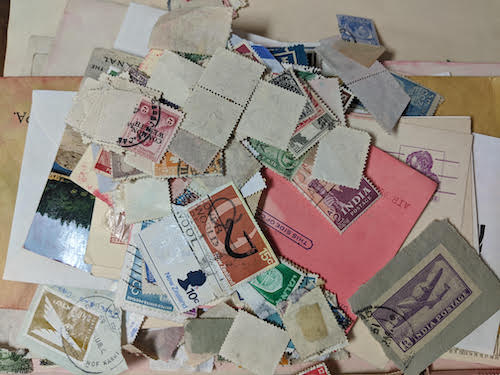 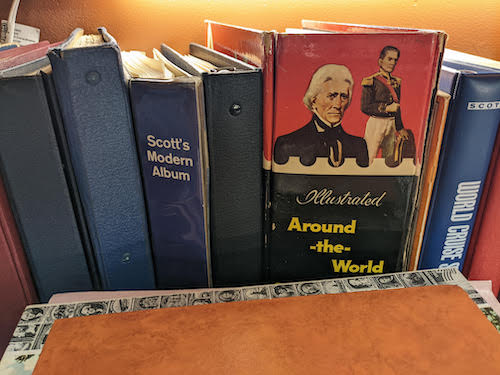 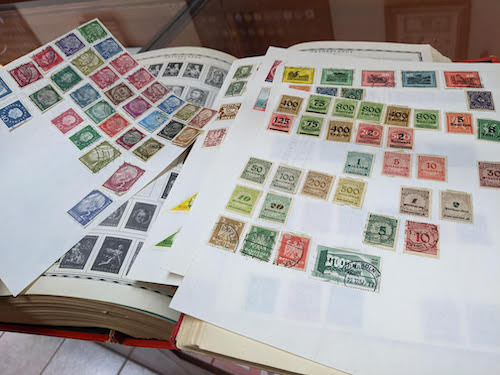 By Ron Polaniecki
As a youth, I dreamed about filling up every one of the some 15,000 empty spaces in
my vintage (1960) “New Ambassador Album for Postage Stamps of the World.” Ditto for
my, who also is a collector.

Then as the years went by, the impossibility of that task set in — along with the demands
and busyness of life. So, I, like many other Baby Boomers, set aside my collection.
Recently, I’ve reawakened my stamp collection after 50 years on the shelf. Here’s what
I discovered. (And even if you’ve never collected stamps, what I found in my
reconnection may be of interest.)

Those stamps I collected as a school boy continue to brim with variety, culture,
pageantry, color and history. They are today, as they were then, tiny tickets to exotic
sounding locations.

Looking back, I recall that filling blank spaces in my album was immensely satisfying
because it was akin to finding treasure. And that thick Scott Standard Postage Stamp
catalog I consulted in the reference section at the public library had a Biblical dimension
in terms of its scope and reputation as the authoritative source. And visiting a stamp
store made me feel a bit more grown up — and perhaps a bit smarter — than I really
was.

But nostalgia aside, what’s factually the same about stamp collecting today as it was
five decades ago? For starters, there is still a Boy Scout badge in stamp collecting.
However, while the requirements for that badge are remarkably similar today as they
were in the 1960s, the number of badges awarded has drastically declined. In fact,
stamp collecting slipped from its position as a reasonably popular badge, to its current
spot in the bottom ten of some 130 badge offerings.

To be sure, those with a re-triggered interest in stamp collecting will find a lot of familiar
territory such as terminology (regular vs commemorative issues), tools (magnifying
glass, tongs and perforation gauges), and the opportunity to still purchase stamps “on
approval.”

However, to no one’s surprise, much has changed. For example, YouTube videos are
available on virtually every aspect of the hobby.

And, of course, the Internet has impacted the hobby on many levels. For instance, with
so much more information now available, it is easy to shop for the best prices across
multiple websites, thus pushing stamp prices downward.

This is in turn has been among factors that have led to the closing of the many stamp
stores that once dotted cities and towns across the country. Charles Berg, Stamp King,
Chicago, owns reportedly the last stamp store in the city and suburbs. Not surprisingly,
after xx years in the business, he has those “you-couldn’t make-this-up-if-you-tried”
intriguing stories to tell.

J. Moyer, owner of Oakton Coins & Collectible, Skokie, offers perspectives on some
other changes. “It’s a different kind of collector today. They are not really stamp
collectors; they are stamp book collectors. They enjoy collecting an album that
somebody took a lot of time to make,” said Moyer.

Interestingly, he added, those low-value stamp collections can be a good decorating
tool. “Table tops with stamps all over, and then Lucite to lock them in, tends to look
pretty cool,” Moyer quipped.

A more societal related change is described in a February 23, 2020 Collecting Insights
article, “Pluses and Minuses Concerning the Future of Philately” by Robert Ziegler, then
president of the American Philatelic Society’s Board of Directors. He asserted that more
women and people of color are interested in philately and postal history than ever
before, due in part to the increasing number of U. S. Postal issues featuring people of
color and achievements of women.

While those I interviewed for this article had varying thoughts about the future of the
hobby as well as possible ways to spark the interest of young people in stamp
collecting, there was one common theme to their advice.

All concur that if there’s a “secret sauce,” this is it: Look at stamp collecting through a
fresh lens! In other words, don’t try to collect every type of stamp from every country on
the face of the earth. Instead, become a “topical” collector.

And even if you were once a topical collector, think about what interests you today, what
you would like to learn more about now – whether it’s plants or sports or cryptocurrency.
Then pursue your chosen topic through postage stamps that reflect your particular focus
and interest.

And if you never collected stamps? Consider picking a topic and giving it a try.
For instance, Ray Niekamp (a former Bellwood, Ill., resident, now retired in Texas) got
back into stamp collecting after his albums had been dormant for years. Niekamp, who
enjoys bike riding, relishes his collection of stamps featuring bicycles. And, he added,
he decided that his favorite type of stamps are the engraved ones, where the artwork is
painstakingly created by engraving metal plates. Since this process disappeared around
1960, Niekamp doesn’t collect anything post-1970.

He mentioned that butterflies and airplanes are popular among collectors. Other
collectors, he noted, enjoy exhibiting their material and are fascinated by postal history.
One such collector had an extensive exhibit on the famed Orient Express rail route.
Another collector, said Danzer, focused on the Graf Zeppelin flights and its lore. In other
words, be creative in selecting your special focus.

Cheryl R. Ganz, Ph.D., who held the post of chief curator of philately at the
Smithsonian’s National Postal Museum between 2007-2014, and is now curator of
philately emerita, added that one popular way to collect is to select a country of heritage
or a country where you worked or traveled.

Ganz is the co-editor of Every Stamp Tells a Story, 2014, published by the Smithsonian
Institution Press, Washington, D.C. Another popular area, she continued, is to collect
picture postcards and mail from your hometown.

Additionally, Ganz suggested that those re-entering the collecting arena consider
penguins. “Just type ‘penguins’ into an eBay search box and you’ll be amazed at the
variety of penguin stamps at modest prices,” she said. Or, added Ganz, consider
collecting stamps from the Vatican. “You can join the Vatican Philatelic Society and
follow it on its Facebook page.”

It’s been said that stamp collectors are story collectors. So just as there are limitless
stories to be told, there is also an extraordinary large number of options for topical
collections.

Certain to creep into any discussion about stamp collecting is the investment aspect.
Occasionally, stories emerge of a billionaire who purchased a rare item at auction for an
astronomical price. But those are notable exceptions.

Niekamp noted that after getting back into the hobby, he realized that the average
collector is unlikely to strike it rich. He pointed out that the first stamp issued by England
in 1840, the famous “Penny Black,” can be found on the market for a surprisingly low
price.

Moyer summarized the misconceptions and myths about stamp values: “Young people
think stamps are either worthless – or that they are worth more than they really are.”
Conclusion? Ganz said it best: “Rather than thinking of collecting as an investment,
think of it as an engaging educational way to enjoy and share your leisure time.”

Philately – (fuh·la·tuh·lee) French in origin, is the study of postage stamps and postal
history – also refers to the collection, appreciation as well as research regarding
stamps.
Romantic rarities – Among the many unique stamps and postal items are the covers
(envelopes) from the Pony Express mail delivery service. For example, a cover
postmarked on the first day of the Pony Express service, April 3, 1860 is reportedly
valued at $300,000 or more. (Many may not be aware that the Pony Express, which
operated from April 3, 1860, to October 26, 1861, between Missouri and California, was
a short-lived, financial flop.)

American Topical Association (ATA), established in 1949 in Milwaukee, Wis., is a U.S.-
based philatelic society and the largest organization devoted to topical stamp collecting.
Stamp shows are a great way to learn more about stamp collecting.

The largest show in the area is CHICAGOPEX, hosted by the Chicago Philatelic Society,
and set for November 18-20, 2022.

Stamp clubs – Organizations through which collectors buy, sell, and trade material, gain
knowledge, and enjoy many other philatelic pursuits. Check with stamp dealers or other
collectors about stamp clubs in your area.